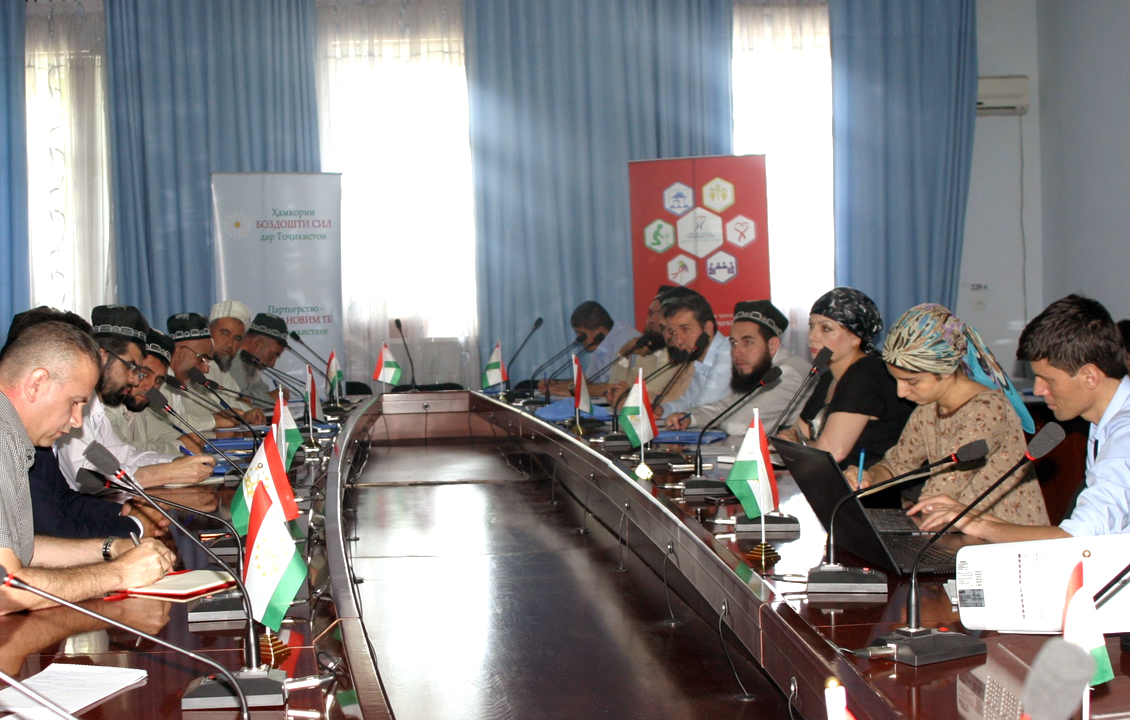 Last year, a Memorandum of Understanding was signed in Tajikistan between the Committee on Religious Affairs, Regulation of National Traditions, Celebrations and Ceremonies under the Government of the Republic of Tajikistan (hereinafter – the Committee) and the TB-REP project grantee representing the civil society – Republican Public Organization “Young Generation of Tajikistan” managing the Secretariat of the STOP TB Partnership, Tajikistan. The Memorandum and a relevant action plan were developed based on the agreements achieved in the course of the round table discussion held on 12 June 2017 by STOP TB Partnership, Tajikistan with participation of 11 Imams from 4 pilot project regions – Yovon, Vakhsh, Vose, Farkhor – and Dushanbe as well as senior specialists of the Committee, and a representative of the Republican TB Control Center.

The aim of the meeting was to discuss the potential and the format of integrating the TB component into the activities of the Mosques and Imams. The committee supported this initiative and the representative of the Republican TB Control Center emphasized that TB remains a big challenge for public health in Tajikistan and highlighted the importance of involving religious leaders in supporting the treatment and their contribution to the detection of new TB cases by disseminating the key messages about TB among population. He also said that people with TB remain undetected and those enrolled in TB care need comprehensive support to complete their treatment.

The role of community leaders, in particular religious leaders, is embedded in the Tajikistan National Advocacy Strategy developed within the TB-REP project. Active involvement and increased participation of the community and its most active members in the fight against tuberculosis, as well as community support for people affected by TB are the core of the national strategy.

A results-based sponsorship model entailing a shared contract among Imams, TB patients, TB doctors, and Support Group Volunteers of Stop TB Partnership, Tajikistan as a monitoring party has been developed.

The Imams acknowledged the importance of this initiative from religious perspective as the Mosques collect charitable donations of the parishioners on the one hand and take care of people with TB on the other. The Mosques’ resources may be used to address a number of prioritized issues in Tajikistan, such as supporting sick and poor people, orphans, widows and communities affected by natural disasters. The Committee members supported the initiative and underlined that in case of results-based sponsorship model, which involves several people, the use of religious charity fund is justified. The amount to be paid to TB patients will be determined by a joint decision of Imams at the district level, while several Mosques will participate in implementation of the model in every district. Besides, it was decided to adopt TB awareness-raising component as a preaching subject in the mosques’ prayer agenda.

The results-based sponsorship model and draft shared contract were developed based on the results of stakeholders meetings in 4 pilot project regions. The contract describes the procedure of collaboration among Imams/Mosques, TB patients, TB doctors/PHC coordinators, and Support Group Volunteers, defining the rights and obligations of each party.

Within the results-based sponsorship model, Mosques will take care of people with TB living in surrounding Mahalla (area or community) from the first day of outpatient treatment until the last day of such treatment. On a monthly basis, certain amount from the Mosques’ charity donations will be provided to TB patients. In addition, Imam will be engaged in offering psychological support to persons affected by TB and their families. Such support will be provided as long as the person with TB adheres to the treatment and complies with all the requirements set by the doctor.

The Support Group Volunteers will be responsible for monitoring the quality of care and the access to treatment and will collect feedback on the results-based sponsorship model implementation.

STOP TB Partnership, Tajikistan provided Mosques and Imams with relevant brochures and booklets. Imams raise public awareness on TB, explain the importance of the issue, inform people about the TB symptoms and how to address them, explain the importance of adherence to treatment, remind people about vulnerability and financial burden of TB affected persons and their families, and provide support to people with TB and their families.

TB doctors together with the Support Group Volunteers identified people with TB to be enrolled in results-based sponsorship model in all the pilot districts. As of October 2017, 13 agreements on collaboration between religious unions and persons with MDR-TB were signed. Financial and psychological support will be provided to patients with MDR-TB on a monthly basis until completion of their treatment as long as they adhere to treatment and comply with all the set requirements. Every month, the Support Group Volunteers of Stop TB Partnership, Tajikistan in collaboration with district TB doctors collect the receipts signed by religious unions’ representatives and persons with TB. The progress in implementation of the results-based sponsorship model is reported to the Secretariat of Stop TB Partnership, Tajikistan on a monthly basis.

As illustrated by the example of pilot regions, such collaboration opens great prospects to improve the situation with TB detection and treatment in the country.

MY VICTORY STORY: First of all, doctors should perceive a person not o ..

Religious communities in Tajikistan are now actively engaged in the de ..