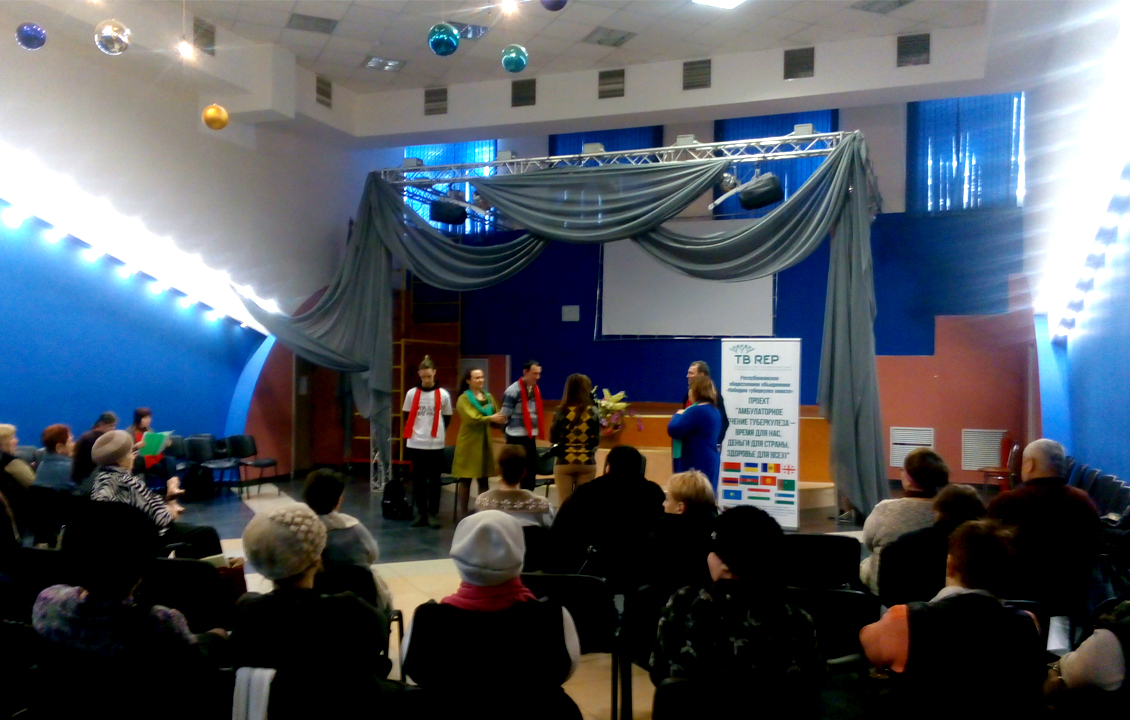 During 9 months, from June 2017 to February 2018, project partner in Belarus – Public Association “Defeat Tuberculosis Together” – assessed the impact of preventive interventions using the Forum Theater approach on the level of tuberculosis awareness and tolerance towards people affected by the disease.

One of the main stereotypes, which the performance scenarios were supposed to address, was the danger to get infected with tuberculosis from the patients receiving ambulatory care. This widely spread erroneous belief leads to the social isolation of people who receive treatment in ambulatory settings and to the reluctance of primary health doctors and officers of the social services to work with such patients.

During the entire period of assessment, 250 respondents were covered. The assessment data demonstrated that after the performances the level of awareness and tolerance among the visiting audience increased by 28.9%. This indicator is an evidence of the efficiency of the Forum Theater approach in improving the knowledge about tuberculosis among the involved audience and changing their attitudes to people with tuberculosis.

Changes in knowledge and attitudes varied among the participants belonging to different age groups. Thus, the most intensive changes were seen in people aged 15-29 years (38.1%), while the lowest – among people over 60 years of age (7.1%). However, it should be noted that people aged 60 and above demonstrated a higher initial level of knowledge (53.5%) as compared to young (24%) and middle-aged (28.9%) respondents.  Apparently, such difference is related to the fact that elder people, on the one hand, have a bigger experience of interaction with people affected by tuberculosis and higher tolerance (maybe formed throughout their lives) and, on the other hand, are less likely to change their beliefs and attitudes.

There is also a correlation between the professional background and the level of changes in attitudes and knowledge. Thus, in Gomel, Vitebsk, Grodno and Mogilev cities the prevention activities were attended by staff members of social protection departments, which influenced the responses in the age categories of 15-29 years and 30-59 years. Such specialists, due to the relevant background and engagement in social work, demonstrated a higher level of knowledge about tuberculosis and a higher tolerance towards people affected by this disease than, for example, the students in Minsk and Brest did.

Conisdering that people aged 15-29 years are more apt to change their beliefs and attitudes, prevention activities using the Forum Theater approach among students and young people are the most effective.

At the same time, the experience of engaging representatives of social services and elderly people defined further prospects of the program activities – the assessment data demonstrate the potential of those groups in providing community support to people with tuberculosis.

Performances of the Forum Theater raise the level of TB awareness and ..

In Belarus attendance of the forum theater performance allowed raising ..