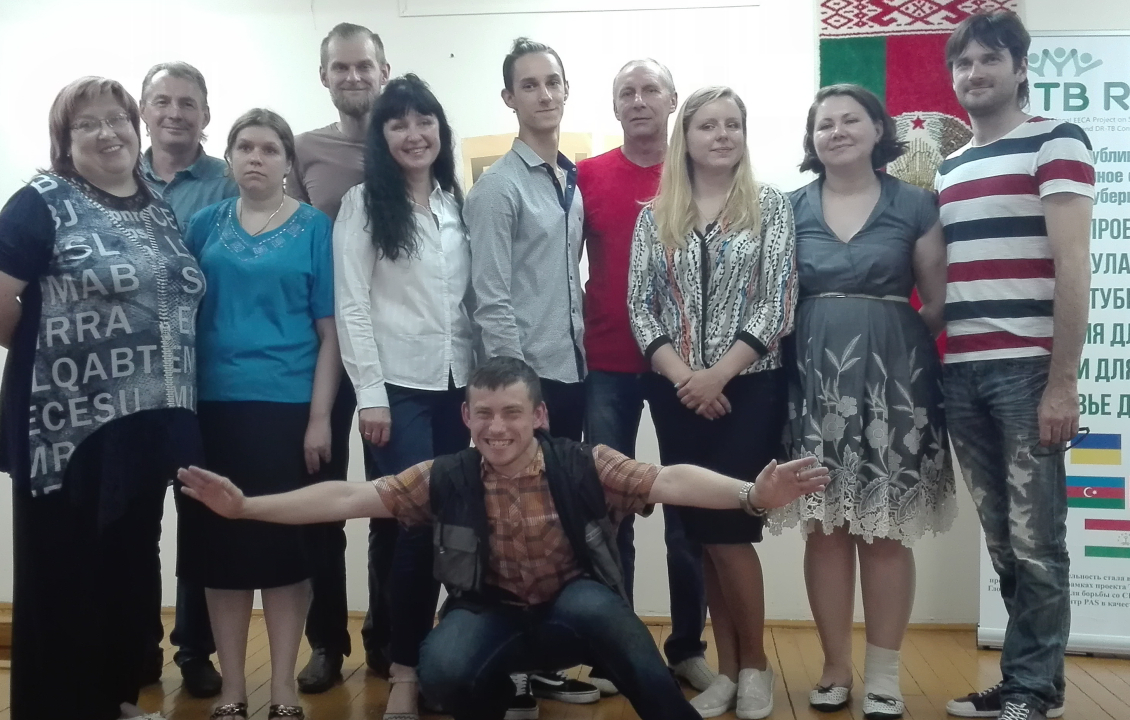 One of the tasks of the TB-REP project is raising the awareness of different groups of people about tuberculosis (TB), in particular about the possibilities of ambulatory TB care, and reducing stigma towards people with tuberculosis, especially those who are treated outside hospital facilities. The Republican Public Association “Defeat Tuberculosis Together” – civil society partner of the project in Belarus – suggested performing this task not through the traditional lectures or meetings, but using more interesting and innovative formats of work, which allow ruining the invisible barriers between the “lecturer” and the listeners, engaging the audience into discussion of the problem. Forum Theater is one of such formats.

Forum Theater stipulates staging a specific situation depicting a certain social problem, after due planning and rehearsal. The “conceptual core” of the performance are the real daily conflicts, which are staged as dramatic scenes with further discussion. Such approach contributes to the development of creative thinking, ability to assess the emotional state of people and analyze different models of behavior.

The founder of Forum Theater was a Brazilian theater director, Augusto Boal. In the 60s, he created a “newspaper theater”, where actors practiced performances based on newspaper articles. Such performances were presented for people who could not read. At one of such performances, telling about a factory riot, when actors were performing on stage, one of the visitors asked to stop the performance and said: “You show it wrong, I was there and I know how it was”. So the theater director told the man: “Then show us how it really was”, and the visitor went on stage instead of one of the actors. When the actors continued performing, the man requested to stop the performance again and came back on stage to “correct” the actors once more. This is how the Forum Theater was born.

In such interactive format as the Forum Theater, the main work on the issue presented is done when the host initiates a discussion with the visitors on what they have seen. He offers people to explain what is happening on stage, what the problem is and invites people from the audience to play some roles in the performance instead of the actors. Becoming an actor, the person gets a better understanding of the character’s feelings and the results of his or her intervention. Such involvement allows people to get a different perspective of the issue and think over possible options to resolve the situation.

To organize a Forum Theater to raise TB awareness, in May 2017 the RPA “Defeat Tuberculosis Together” shared with civil society organizations in Belarus information about project activities to reduce stigma towards people with tuberculosis and members of their families, about the intention to use innovative technologies within such activities and invitations to take part in the Forum Theater.

Several organizations got interested in the project. Among them, future project participants were selected: volunteer club of the Brest National University named after A. Pushkin and Vitebsk clubhouse “Wings of Hope” together with the social protection department of Pervomaysk district in Vitebsk. A master class was organized for representatives of those organizations. During the master class, the participants were told how to prepare and conduct performances of the Forum Theater and how to assess the expected changes in knowledge and attitudes of visitors to the issue discussed. The master class also included an awareness-raising session on tuberculosis, which allowed developing a deeper understanding of the advantages of outpatient TB care among the participants and explaining why a patient with tuberculosis who receives therapy on a regular basis is not dangerous for people around. The last component was of particular importance as this was the message, which the implementing partners were to deliver to their audiences.

During the master class, three preliminary scenarios for interactive theater performances were developed. Information on the topic “Tuberculosis – Myths and Reality” was used as the basis for such scenarios. The scenarios drafted were then finalized by experts in theater technologies and prevention activities, who were invited to take part in the project. There were two key messages to be delivered to the audience: “Tuberculosis is curable” and “A patient with tuberculosis who receives ambulatory treatment does not infect other people”.

In summer 2017, three cities of Belarus – Brest, Vitebsk and Grodno – hosted interactive performances called “Alone” and “The Wall” by volunteer club of the Brest National University named after A. Pushkin and Vitebsk clubhouse “Wings of Hope” (with support of the social protection department of Pervomaysk district in Vitebsk). The performances were presented under the slogan “Ambulatory TB care – time for us, money for the state, health for all!”

In Brest, the performance was attended by students who lived in the university dormitory, and in Vitebsk and Grodno – by staff members and visitors of social protection departments, in particular people with mental health conditions and elderly people.

Organizers of the performances assessed their impact on the level of knowledge of the audience and formation of tolerant attitudes to people affected by the disease. Surveys were conducted among the visitors before and after the performances to assess the difference in the level of knowledge about the possibilities to cure tuberculosis and concerns about patients receiving ambulatory TB care being dangerous for other people. Besides, the surveys assessed changes in the attitudes to people affected by tuberculosis.

Only fully completed survey forms were analyzed. In total, answers of 118 respondents were reviewed, over 80% of them being women. Analysis of the survey forms showed 19.2% increase in understanding that tuberculosis is curable and 29.2% increase in the awareness of the fact that a patient with tuberculosis who receives treatment is not infectious for people around. The biggest changes in the knowledge level for both questions were demonstrated by respondents aged 15-19 years, the smallest – by respondents over 60 years of age. However, it should be noted that elderly people demonstrated a higher initial level of knowledge as compared to young and middle-aged respondents.

There were also considerable changes in the level of tolerance. Thus, the number of positive answers to the question “If your friend receives TB treatment, taking medications daily, will you go to his birthday party?” grew from 63.8% to 78%. Besides, after the performance 84.7% respondents – which is over 20% more than before the performance (63% - pre-performance) – gave positive answers to the question about their readiness to work or study in the same premises with a person who receives ambulatory TB care.

In general, increase in the level of TB knowledge and tolerant answers to survey questions was 29.1% (growing from 32.8% before the performances to 61.9% after them). Such result is an evidence of effectiveness of the Forum Theater approach in changing the knowledge about tuberculosis and attitudes of participants to people affected by the disease.

Performances of the Forum Theater raise the level of TB awareness and ..

In Belarus attendance of the forum theater performance allowed raising ..